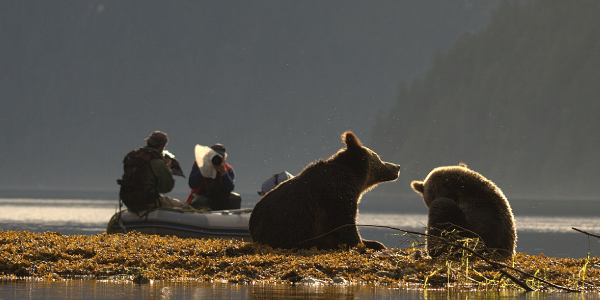 How much money might "Cheeky" the bear have earned for British Columbia, had he not been shot by a trophy hunter? A new economic analysis produced by a Stanford University-affiliated research institute suggests: a lot. Instead, the young grizzly was killed by NHL player Clayton Stoner, who cut off the bear's head and left his body to rot. Today, new data shows the economic benefits of trophy hunting in the Great Bear Rainforest are so small, the activity may actually cost taxpayers more than it brings in.

"This study reinforces what First Nations in the area have been saying for years," said Kitasoo/Xai'xais councillor Doug Neasloss. "Bears are worth more alive than they are dead. That goes for our communities, the ecosystems on the coast, and now we find out it's true for the B.C. government too."

The report, authored by the Washington D.C.-based Center for Responsible Travel, calculates that bear viewing in the Great Bear Rainforest generates more than 10 times the employment, tourist spending, and government revenue compared to hunting in the same area.

"I've worked as a bear viewing guide for the past three seasons," said Jason Moody of the Nuxalk Nation. "Those numbers reflect what we're seeing, for sure. There's so much potential for tourism and hospitality, but trophy hunting is holding things back. And that makes it harder for First Nations to create jobs for our people that are in line with our laws and our traditions."

In September 2012, Coastal First Nations announced a ban on trophy hunting for bears in the territories of all nine member nations, which closely correspond to the area known as the Great Bear Rainforest. However the B.C. government continues to issue kill tags, claiming jurisdiction over bear management.

A poll released by McAllister Opinion Research in September 2013 showed 87% of British Columbians support an end to bear hunting in the Great Bear Rainforest. A subsequent study by a separate firm, Insights West, found that 88% of BC residents oppose trophy hunting. 95% of hunters surveyed by McAllister agreed that "you should not be hunting if you are not prepared to eat what you kill."

"This latest study raises an important question for B.C.'s minister responsible for hunting, Steve Thomson," said Heiltsuk tribal councillor Jessie Housty. "Last fall, we learned the science used to justify the bear hunt is deeply flawed. Now we see the economics are completely backward. So will Thomson do the right thing and bring B.C. government policy in line with First Nations law? Or will he let trophy hunters take more money out of taxpayers' pockets?"