We're bringing the Bears Forever Project to you 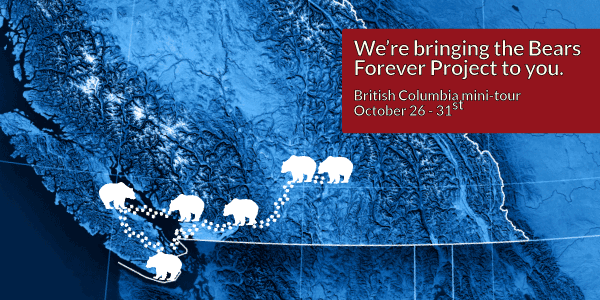 30,000. That’s how many people have watched the documentary ‘Bear Witness’ on YouTube in the last six weeks.

Thanks to all of you, we’ve been able to reach audiences all around the world — from Fernie in BC, to Fellbach in Germany. We’re awed, inspired and motivated. But we’re also realistic.

If we’re going to bring provincial hunting regulations in line with First Nations law, we need decision-makers to understand that British Columbians overwhelmingly want to end the trophy hunt for bears in the Great Bear Rainforest. Poll results show nine in ten people in the province agree on this. But politicians don’t believe polls anymore — they believe people.

We need to meet supporters face-to-face, show the documentary to new audiences, and grow our community. It’s time to hit the road.

Starting this weekend, we're taking 'Bear Witness' on a week-long tour across southern B.C., hitting the cities of Kelowna, West Kelowna, Chilliwack, Victoria, Nanaimo and Burnaby. We’ll be meeting people in coffeeshops, at farmers’ markets, on university campuses — anywhere they’ll have us — to share stories and collect pledges.

As it happens, we’ll be collecting signatures in the ridings of the two people with the most power over the fate of bears in BC: Premier Christy Clark and Forestry Minister Steve Thomson.

If you live in any of these cities, we'd love to meet you in person at one of our FREE screenings and Q&A sessions to thank you for your support of the project so far.

If you're not able to attend our events, but you still want to help us on this tour, we are looking for small donations to help us cover costs for handbills, custom baseball hats, clipboards and coffee for our volunteers; along with rental costs for a small projector, screen and speakers. If you're able to help us with a donation, click here.