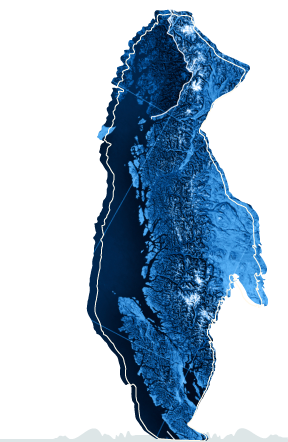 Get to know the bears

A few generations ago, grizzly bears roamed freely along the west coast of North America, from the northern tip of Alaska through central California and down to Mexico's Baja peninsula.

Bears have survived across much of British Columbia, but the Great Bear Rainforest remains the only place in the world where black bears, grizzlies and the iconic white Kermode bear all live together. Dwindling salmon runs, climate change, logging and trophy hunting threaten that delicate balance.

Nobody knows exactly how many bears remain in this special, sacred place. These are
a few of our favourites: 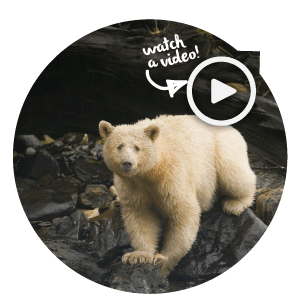 This medium-sized female Kermode—or 'spirit' bear—lives on an island in the heart of Kitasoo/Xai'xais Territory. 'Snow White' is estimated to be about five years old. This summer she was out looking for a mate so she can have her first cubs over the winter.

All Kermode bears carry the gene that produces white fur, although only one in ten will born white. This means that Snow White's cubs could be either black or white. While it is illegal to hunt white-furred Kermode bears, bears with black fur are fair game during BC's biannual trophy hunt.

In this trail camera footage, Snow White is graceful and surefooted as she crosses a river on slippery stones and logs, using her nose to guide her to food. Like other white and grizzly bears, Snow White provides local economies an extremely valuable natural resource in the burgeoning eco-tourism sector. Several hundred eco-tourists "shoot" Snow White each year... with cameras. 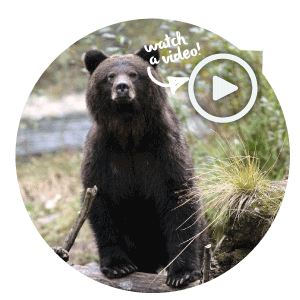 Researchers affectionately call this very large male grizzly 'Papa'. Thanks to his age and imposing stature, this bear has fathered a great many cubs across Nuxalk, Wuikinuxv, Kitasoo/Xai'xais and Heiltsuk territories.

Chemical analysis of Papa's hair shows he gets about 90% of his protein from spawning salmon. He dominates other bears at the salmon runs, which occur from July to late October. But to get between rivers, he has to travel through dangerous roaded watersheds, where trophy hunting is easy. So far, he's been lucky.

In this trail camera footage, Papa rolls around happily in a pile of rotting fish. Researchers set up these piles in the hope of attracting bears so they can videotape them and pick up the hairs they leave behind. It's because of these hair samples that we know so much about Papa's diet and wanderings. 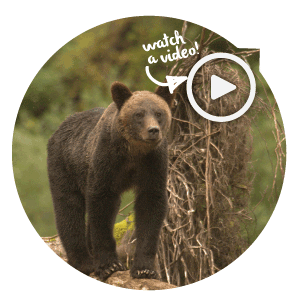 This scrawny adolescent is spending her first spring away from her mom and siblings, learning how to make her own way in the world. It'll be a few more years before she grows into those big ears!

Ursula lives in the heart of Wuikinuxv territory within her mother's 200-square-kilometre range. This is the first year we have detected her on cameras, although to the people of Wuikinuxv village she is a familiar and friendly face.

Sadly, one in three trophy kills in BC are female bears like Ursula and her mother. Can you tell Ursula's gender from the video? HINT: look at her belly.

In this trail camera footage, Ursula surprises herself as she investigates a smelly pile of moss and sticks. 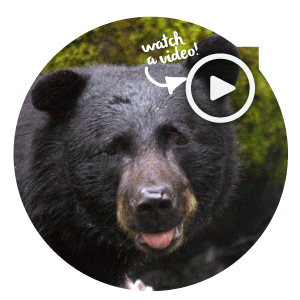 This large male black bear, likely ten years old, is shaking his stuff as he scratches his back on a rub tree about half way between Bella Bella (Heiltsuk territory) and Klemtu (Kitasoo/Xai'xais territory).

Researchers know they can count on 'Baloo' to leave them with funny video clips on the trail cameras every year.

This footage was taken in May 2013; at that time he was eating primarily grasses and sedges, still waiting for berries and salmon. Co-existing with larger and more aggressive Grizzly bears, salmon will make up only about 25% of Baloo's diet. 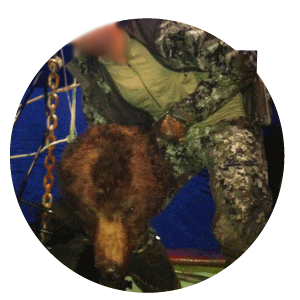 This playful young grizzly was first sighted by field technicians camping in the Kwatna estuary during early spring 2013. After watching him stick his tongue out at them, the technicians named the curious bear 'Cheeky'. Keeping a distance of about 45 metres, he would follow alongside as they did their work, stopping to eat and roll in the grass.

Sadly, Cheeky was killed by trophy hunters on May 26, 2013. Shot three times while he browsed in an open field, Cheeky’s head, fur and paws were cut off. The hunters left the rest of his body to rot in the estuary.